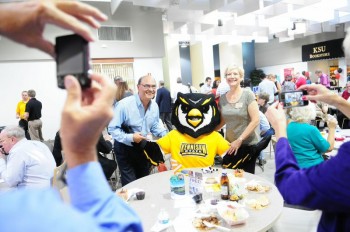 Last Friday marked our 19th annual Celebration of Success — a night to honor instructors for their work with programs such as Culinary Apprenticeship, Paralegal, Languages and Medical Assisting.

Barbara Calhoun, dean of the College, heartily thanked the instructors for their dedication and commitment to the estimated half-million students they’ve served over the past 20 years. Guest speakers for the night were John Anderson, assistant vice president of facilities, and Brian Bohannon, head football coach.

Anderson’s showcase of KSU’s expansion included plans for a student recreation center (named after former KSU President Dr. Betty Siegel) and the Skip Spann Connector. KSU President Dr. Dan Papp addressed faculty and staff on Aug. 14 at the Opening of the University event. He said the consolidation will put KSU among the 50 largest universities in the U.S.

Aug. 15 marked move-in day for the new football players, and Brian talked excitedly about the history-making momentum of their presence in the community. To the instructors in the audience, he said, “As coaches, we want the same thing you want – for our students to be successful.”